From Sixteen to Eternity

Earlier on Saturday evening I made a short trip into Middleton to pick up sandwiches for our dinner.  I'd had a bad day with my tummy and just could not face cooking.  I grabbed a couple of sandwiches and headed home.  As I drove, I listened to the "Oldies but Goodies" station on the radio.  I am myself now an "oldie but goodie" you know! (It's ok, you can laugh now, got a good smile out of that one myself!) 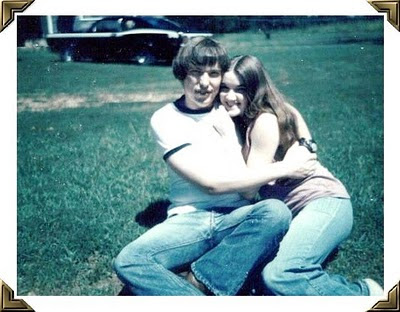 Me and Terry in my 16th summer!
I was driving along humming and singing when an old favorite came on...Ringo Starr...You're Sixteen, You're Beautiful and You're Mine.  Oh my, in my mind's eye I was back in my parent's back yard.  It was a warm summer's day, Terry's car was parked near the hydrant, the 8-track player was blaring, we were running circles around the car and I was squealing as we 'washed his car'!  I could hear his voice so clearly as he chased me with the water hose and our laughter as he 'caught' me.  It was my 16th summer and I was most certainly HIS!
As I drove, I thought about that summer and the awe of being 16 and in love.  It was 1974 and it was the summer he asked me to marry him.  Everything in my life was so good, pain and heartache seemed like emotions that belonged in some other world.  I had had them in my life, but he had helped to wipe them all away.  He sheltered me and protected me from them now.  How could they ever touch my life again?  I was blissful just to be in his presence and had no doubt he would always be there for me.
We had a wonderful life together, but it ended much too soon.  As much as he loved me and wanted to be there for me, his body simply could not keep the promise his heart made.  God had other plans.  So, two years ago he went home to be with Jesus and I was left here to try to make sense of it all.  The only problem with all that is that it made no sense whatsoever.  And, as long as I looked at it from a human prespective, it never would.  When I began to try to see it as God sees it, it began to make better sense.  It still hurt, still does.  I still miss him every single day of my life and wish he was back here with me.
However, I do now understand more about how God uses pain in our lives to grow us in His love and a better understanding of what His plans are for us.  You see, I had become a Christian when I was 11 years old.  When I met Terry and fell in love with him at such a young age, I stopped trusting God for my strength and purpose in life and started looking to Terry for that.  Even with that misunderstanding of what God wanted from our relationship, He still allowed us to be together for over 35 years.  What an amazing God we serve!
Over our years together, we faced a lot of pain and heartache.  Sometimes I dealth well with it and at others, I failed miserably.  I learned more about God and who He really is and what He really wants from me.  Yet, when it came time to let Terry go with Jesus, I had such a difficult time understanding and accepting God's will.  At first, I thought it was a flaw in me or a lack of faith.  Then, I realized that it was completely human for me to be feeling the emotions I was feeling and to be experiencing the questions that filled my mind.
Thankfully, the God I serve is not the God I grew up thinking He was.  He was not sitting in heaven waiting to rap my hands when I messed up or pronounce harsh judgments on me when I failed.  Quite to the contrary, He was, indeed, in heaven loving me and forgiveing me and holding me tenderly through my pain.  He wasn't angry with me when I questioned him.  He was patiently waiting for me to reach the place when I could ask of Him what I needed in order to walk forward through this valley I was facing.  What an amazing and awesome God we serve!
So, ask I did!  Every single day, many times on most days, I asked.  Sometimes I asked the same questions over and over again.  He never got impatient with me, He never chided me, He never punished me.  Instead, He loved me....He just loved me more and more and held me closer and closer!  Isn't that the picture you would want to have of your God?  Don't you want to serve a God who understands you, who holds you even more closely when you're hurting, who is waiting for you to figure out the questions so He can give you the answers?
If your answer is 'yes', then I would like the opportunity to introduce you to Jehovah God through His Son, Jesus Christ, who lived, bled, died and rose again on the third day in order to bring you into right relationship with your Creator God.  Please join me over the next few posts as I introduce you to Jesus Christ, the sinless Savior and only begotten Son of the Living God.