This is a picture of my late husband and his natural Daddy, James Elton (Bob) Chandler, taken in March of 1957 when my husband was 3 years old.  Bob was born on June 30 of either 1923 or 1924, there is great disagreement among family members.  Bob was killed in an automobile accident when Terry was only nine years old.  I never had the privilege of meeting him, but I know he must have been a wonderful man because his son was the best. 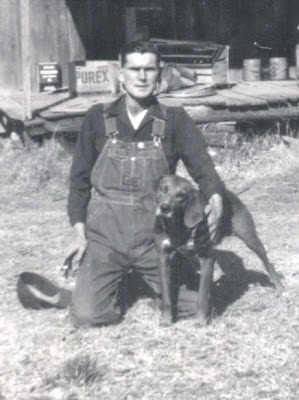 This is a picture of my Paw McDonald, James Herbert McDonald, with his dog, Old Rattler.  Paw died on June 30, 1966 at the age of 57.  He farmed during the day and worked a second shift job at the local hide tannery.  He had worked his second shift job at the hide tannery, had driven home, come into the house and placed his lunch box on the kitchen table, turned and walked into the living room and fell dead in the living room floor.

Paw was a wonderful man, whom I loved dearly.  Maw and Paw had only sons.  When Daddy married Momma, she was special to them because she was the first female member of their family.  When Momma gave birth to me, I was spoiled from Day One!  They loved me and spoiled me unashamedly!  If I wanted anything and it was in their power to give it to me, all I had to do was ask and it was mine.

"For I know the plans I have for you,”
says the Lord.
“They are plans for good and not for disaster,
to give you a future and a hope."
﻿

I had an experience on my way home from Wal-Mart this past Friday evening.  There was somewhat heavy traffic coming out of town and I had to sit at a side street stop sign for a bit before deciding I was just going to have to make my way into the ongoing march down the highway.

As I pulled out, I noticed I was following an Eclipse that was driving somewhat slowly.  It was getting late and I needed to get home.  I had a few groceries with me, including orange sherbet push ups (love'm!) and a few other items that needed to be in the fridge or freezer as soon as possible.  The Eclipse finally decided to pass the slower moving traffic and cut out in front of me as I was making the pass.  I sat down on my horn but they just kept coming, and very slowly at that!

I bit my tongue to keep from saying something I would regret.  I followed the little car down the highway until I reached my turn, which they made as well.  The car begins to speed up somewhat on the less safe country road that was curvy, hilly and unlit.  I had one more turn and low and behold, the car made the same turn.  Good heavens, I'm gonna have to follow this car all the way home!  Do I know these people?

After making the turn onto my even less safe country lane behind the Eclipse, I immediately thought "You'd better slow down; you're gonna miss that sharp curve ahead"!  Surely enough, the car went careening across the lane and into the ditch, barely missing a huge tree!  I pulled around and got out of the lane, grabbed my cell phone and ran to the car.

There sat three young ladies I would guess were between 16 and 18 years old each.  The girl driving the car was visibly shaking and crying.  I pulled her door open and asked if everyone was okay.  They all answered 'yes' and the driver immediately said "My Daddy will kill me!  He can't find out"!

We couldn't get the car out without assistance so I walked to a neighbor's house to get help.  People began to gather and offer assistance in getting the car out.  The young lady was so upset and my heart broke for her.  She had never driven my road before, was from another county, was trying to listen to her GPS and didn't realize how deep the curve was until it was too late.

As the guys tried to pull the car out, the young lady was crying and repeatedly saying "My Daddy is gonna kill me"!  I walked to her side, lay my hand on her arm and began to pray for peace for the girls and understanding from her Dad.  I asked if she had called her Dad and she said "No".

I knew in my spirit that she needed to make that call.  I called the girls to the side and told the driver I thought she should call her Dad.  He was going to be upset, but he was going to be okay once he understood that his daughter and her friends were okay; the car could be repaired.  She said "You don't know my Dad; he will kill me"!

My heart was breaking for her because I remember just how frightening that was to mess up and then have to tell your parent about it.  I would have done almost anything to avoid facing my parents when I made a really bad decision; I could sense that same fear in this young woman.  Again, I prayed.  The Lord assured me it was all going to be okay but she needed to call her Dad right away.

I talked to her again and she finally agreed to make the call.  She held my hand and placed the call.  She was sobbing and apologizing and then got very quiet.  Then "I love you too, Daddy" filled the night with the sweet fragrance of forgiveness and relief in both parties.  Dad was so thankful his child and her friends were safe!

He asked to talk to me. I talked to him and assured him that the girls really were okay, just very emotionally upset.  I also told him that the adults gathered were in agreement that she should not drive the car back home.  There was questionable damage to the passenger tie rod end and the wheel itself had been warped.

He talked to his daughter and told her to park the car and he would come for her and her friends.  She told him her boyfriend was coming to get them.  He seemed perfectly comfortable with that.  Once again, through sobs I heard "I love you too, Daddy.  Thank you for not being upset with me".

She put her phone in her pocket and walked over to me.  She said "I don't have my Mom with me; she is no longer allowed to see us.  Thank you for loving me and being my Mom tonight.  I kept seeing you making the turns right behind me and I was like why is that person following me?  Then, when I hit the ditch, I was so thankful you were there.  For some reason, I immediately trusted you and knew you were going to stay with me until it was all okay."

I don't say any of that to brag about me; I say it to brag on God.  He is NEVER late, He is ALWAYS on time!  The enemy meant harm to those precious girls............BUT GOD!!!!!  God had a different plan.  I was just where He needed me to be so He could do His work.  It is so true, we (Christians) are God's hands and feet and very often, His heart as well.

I know that Daddy will never forget the fear of that call or the relief when he knew his child was okay.  I can only imagine the joy of that moment when he wrapped his arms around his daughter and held her and knew, really knew, she was okay.  That young lady thanked me over and over for being there.  I asked her if she was a Christian.  She answered that she was and began to cry again and continued by saying "I don't really live like it though".

She wrapped her arms around me and cried on my shoulder and prayed to thank the Lord for letting her and her friends come through okay.  I have rarely heard a more precious prayer from a heart more filled with repentance.  I don't even know the girl's name, it's not important; but I believe with my whole heart the Lord knows her name and she learned a valuable lesson about living Christian, not just talking Christian.

Today, there was a note in my mailbox.  It said simply "I am so thankful God had you following me and I am so glad you are a Christian and knew how to pray.  I may never see you again, but I will always love you.  Daddy says we both needed the reminder to love each other, to trust each other and to trust the Lord and live like we do."


Trust God from the bottom of your heart;
don't try to figure out everything on your own.
Listen for God's voice in everything you do, everywhere you go;
he's the one who will keep you on track.
Don't assume that you know it all.
Run to God! Run from evil!