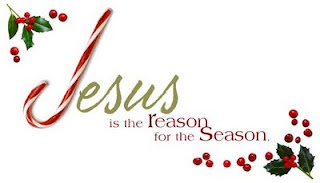 In this day of political correctness, we are told we shouldn't even say "Merry Christmas" anymore, rather we should say "Happy Holidays" so as not to offend any one's religious sensibilities.

Well, excuse me, but THAT offends me! Not just my 'religious sensibilities', but ME! I am offended that people have become so apathetic and lazy that they will sit by while the politically correct gang try to remove any reference to God or to His Son, Jesus CHRIST from our lives.

Did anyone happen to notice that CHRISTmas begins with the word 'CHRIST'? So what if Christians hijacked a pagan holiday? And? If you want to celebrate your Winter Solstice, go right ahead. If you don't turn your heart to Jesus Christ, you're gonna die and go to hell, but go ahead. It's not want I want for you, nor is it what Jesus Christ wanted for you, but if you're determined to do it, you have the right to do it.

I guess that's the point here. I don't agree with a lot that goes on around me. I don't go around trying to stop people from living their lives, unless their life is intruding in some way upon mine. For instance, I will try my best to dissuade a woman from having an abortion because I know she is committing murder. No less than someone who walks into my home and puts a bullet through my head, she is committing murder.

I crusade against drunken driving. If you want to drink and even get drunk, that's your privilege, just don't get behind the wheel of a vehicle and put someone else in danger because of it. I crusade against illicit drug use because I see what it is doing to innocent children. But, if as a consenting adult, you decide you want to throw your life away, it's your privilege to do so. Just don't go offering it to innocent children and young people. Don't ruin their lives just because you can.

I'm not politically correct. I am a blood-bought, born again Christian, washed in the blood of Jesus Christ, my Saviour. I am an American; not a European-American or an African-American, or an Asian-American or any other hyphenated American. I think if you live in America, you should speak English and do so well enough to conduct your business in that language. If you want to speak your native language, that's great! Do it at home.

I don't believe in reparations to black people because of what they lost. I am grieved in my soul for the things their ancestors had to endure and for any racial atrocities commited against any one of them in this day. However, no black man living in America today, unless he is a recent immigrant from another country, has ever spent one day as a slave.

I am against affirmative action. Playing favorites rights no wrongs and only serves to foster bitterness on all sides. It's time to put the past behind us and move forward. Yes, the wrongs of the past will always be with us. No one can deny that. However, unless we let the past go, while learning the lessons of the past, we will not and can not move forward.

I don't think those who are here illegally should be allowed to stay here. They should be sent back to their country of origin, along with their families. If they would like to come back, let them do so legally and pay taxes like every other American. Of course I have compassion for them and for their circumstances. However, breaking the law is still breaking the law. What are we teaching those children if we allow their parents to get away with breaking the law and even reward them for it?

I don't think it's the job of the federal government to pay for all of our needs. Should the government help those who are genuinely needy? Yes, but I'll also say this, if the church had not stepped back from her responsibility, there would be no need for the government to be stepping in. I don't think a woman who drops a baby every year ought to receive larger and larger checks every month so she can support those babies. If she got out and got a job, maybe she'd have less time for sleeping around and making babies.

I don't think the government should pay for rehab for drug and alcohol addicts. They put themselves there, they should be responsible for getting themselves clean. IF the government is going to help, the recipient should be given civil service positions at an agreed upon wage, minimum wage sounds good to me, until the debt is repaid. Just think how much money municipalities and other governments could save if they used that labor for service jobs like garbage collection, street cleaners, cleaning government vehicles (some could even be qualified as mechanics?), or other service areas.

So, as you can see, I'm definitely NOT from the politically correct crowd! Since I'm not, let me just close by saying...........

Diane:
WoW!!!! Isn't it too bad we cannot just say what we think as we allow others to hold opinions different from ours and have enough respect for each other that we can try to understand where each person is coming from. A thoughtful essay.
Roberta Anne

WHOA....this is so awesome...and sounds just like something I COULD HAVE WRITTEN because I AGREE with it all....
GOOD GRIEF, I want all my blogging buddies to come here and read some of your great stuff....may I ask them to??

Goodness, PREACH IT, SISTER!! YOu have said what I feel SOOOOO much better than I ever could!!