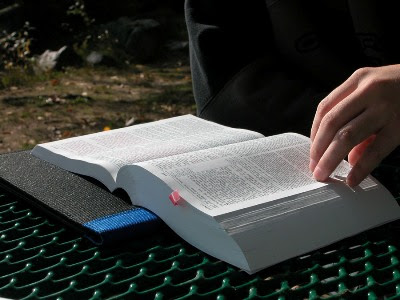 I have been thinking a lot lately about how society seems to have seized upon the idea that whatever we decide is 'normal' is indeed normal and a suitable and acceptable lifestyle.  Biblical marriage is, and has been for many years, under constant attack from the Deceiver and his minions.

The decade of the sixties introduced 'free love' to our vocabulary, as though love had been bought with a price prior to that.  Suddenly, it was free and there for the taking.  Just where do you suppose that idea originated?

As a matter of fact, the idea that our bodies are purchased with a price is Scriptural in origin.  The last nine verses of the sixth chapter of  1 Corinthians deals with this very subject.

12 All things are lawful for me, but not all things are profitable. All things are lawful for me, but I will not be mastered by anything.
13 Food is for the stomach and the stomach is for food, but God will do away with both of them Yet the body is not for immorality, but for the Lord, and the Lord is for the body.
14 Now God has not only raised the Lord, but will also raise us up through His power.
15 Do you not know that your bodies are members of Christ? Shall I then take away the members of Christ and make them members of a prostitute? May it never be!
16 Or do you not know that the one who joins himself to a prostitute is one body with her? For He says, "THE TWO SHALL BECOME ONE FLESH."
17 But the one who joins himself to the Lord is one spirit with Him.
18 Flee immorality. Every other sin that a man commits is outside the body, but the immoral man sins against his own body.
19 Or do you not know that your body is a temple of the Holy Spirit who is in you, whom you have from God, and that you are not your own?
20 For you have been bought with a price: therefore glorify God in your body.

How about that?  It turns out that we are indeed purchased with a price.  The Amplified Bible expresses verses 19 and 20 thusly:


19 Do you not know that your body is the temple (the very sanctuary) of the Holy Spirit Who lives within you, Whom you have received [as a Gift] from God? You are not your own,
20 You were bought with a price [purchased with a preciousness and paid for, made His own]. So then, honor God and bring glory to Him in your body.

I like this translation because it makes it so crystal clear that not even the most educated liberal can misunderstand the meaning!  Paul clearly states to the Corinthian church in verse 19 that the body is the sanctuary of the Holy Spirit who lives within.  The Mirriam-Webster online dictionary defines a sanctuary as a consecrated place, a place of refuge or protection.  So, when we become a Christian, our physical body becomes the consecrated residence of the Holy Spirit and is to be His refuge and protected place of abode here on earth.


30 Therefore when Jesus had received the sour wine, He said, "It is finished!" And He bowed His head and gave up His spirit.

The transaction was completed and Jesus Christ, the King of Glory, gave up His spirit; that same Spirit He had told the Disciples about that would become our Comforter in St. John 16: 7.

Those who would have us believe we can pervert the God-ordained use of our body and do as we please without repercussions is lying and too many are buying into the lie and paying a heafty price for their deception.  We have been told marriage is outdated, we can just co-habitate and enjoy the benefits without the commitment.  We're so shallow and eager to satisfy our flesh that we swallow any lie the Deceiver feeds us.

The pretty girl in the office or the nice looking man who works in the corner office are fair game if they show interest.  And, if they don't show interest, well then perhaps we should just encourage them a bit.  We pay no heed to the fact that he's married and has children or that she is single and completely unavailable outside the boundaries of marriage.  We have become so perverted in our desires to satisfy our flesh that we have even decided individuals of the same sex are appropriate partners for our 'enjoyment'.

That, however, is not what God has to say about this subject.  Romans 1: 18-32 expresses it thusly in the New American Standard translation:


18 For the wrath of God is revealed from heaven against all ungodliness and unrighteousness of men who suppress the truth in unrighteousness,
19 because that which is known about God is evident within them; for God made it evident to them.
20 For since the creation of the world His invisible attributes, His eternal power and divine nature, have been clearly seen, being understood through what has been made, so that they are without excuse.
21 For even though they knew God, they did not honor Him as God or give thanks, but they became futile in their speculations, and their foolish heart was darkened.
22 Professing to be wise, they became fools,
23 and exchanged the glory of the incorruptible God for an image in the form of corruptible man and of birds and four-footed animals and crawling creatures.
24 Therefore God gave them over in the lusts of their hearts to impurity, so that their bodies would be dishonored among them.
25 For they exchanged the truth of God for a lie, and worshiped and served the creature rather than the Creator, who is blessed forever. Amen.
26 For this reason God gave them over to degrading passions; for their women exchanged the natural function for that which is unnatural,
27 and in the same way also the men abandoned the natural function of the woman and burned in their desire toward one another, men with men committing indecent acts and receiving in their own persons the due penalty of their error.
28 And just as they did not see fit to acknowledge God any longer, God gave them over to a depraved mind, to do those things which are not proper,
29 being filled with all unrighteousness, wickedness, greed, evil; full of envy, murder, strife, deceit, malice; they are gossips,
30 slanderers, haters of God, insolent, arrogant, boastful, inventors of evil, disobedient to parents,
31 without understanding, untrustworthy, unloving, unmerciful;
32 and although they know the ordinance of God, that those who practice such things are worthy of death, they not only do the same, but also give hearty approval to those who practice them.

Do not these verses describe society today?  God revealed to Paul, and to other Biblical writers, exactly what would happen when man willfully walked away from His ways and perverted His ordained purpose for His creation.  Yet, in the midst of so much perversion and sinfulness, there remains a remedy.  In Isiah 1:17-19, God reaches out to sinful man and offers that remedy.


17 Learn to do good;
Seek justice,
Reprove the ruthless,
Defend the orphan,
Plead for the widow.
18 "Come now, and let us reason together,"
Says the LORD,
"Though your sins are as scarlet,
They will be as white as snow;
Though they are red like crimson,
They will be like wool.
19 "If you consent and obey,
You will eat the best of the land;

Jesus Christ completed the transaction on the Cross of Calvary.  Nothing more needs to be done other than for the individual to accept the sacrifice, ask for forgiveness and turn from his sin to the sinless Saviour.  Though your sins are as scarlet, they will be as white as snow; though they are red like crimson, they will be like wool.  However, note the qualifying closing verse....IF you consent and obey, you will eat the best of the land.  IF.....perhaps the biggest little word ever written, spoken or translated.  Man must meet God's requirements in order to experience His peace and presence.

We often ask "What in the world is happening to our world today" or "What in the world is going on".  The answer is simple, man has forsaken the God of the universe to go whoring after fleshly pleasures.  We have perverted the use of the body and have defiled the God-designed sanctuary of His Holy Spirit.  Things will not get better until we confess our sin and turn back to His way.

May God help us to turn from our wickedness and return to our Creator.
Posted by Diane at 5:44 AM