Just Give Me What You Have

As soon as Jesus heard the news, he left in a boat to a remote area to be alone. But the crowds heard where he was headed and followed on foot from many towns. Jesus saw the huge crowd as he stepped from the boat, and he had compassion on them and healed their sick.
That evening the disciples came to him and said, “This is a remote place, and it’s already getting late. Send the crowds away so they can go to the villages and buy food for themselves.”
But Jesus said, “That isn’t necessary—you feed them.”
“But we have only five loaves of bread and two fish!”
they answered.
“Bring them here,” he said. Then he told the people to sit down on the grass. Jesus took the five loaves and two fish, looked up toward heaven, and blessed them. Then, breaking the loaves into pieces, he gave the bread to the disciples, who distributed it to the people. They all ate as much as they wanted, and afterward, the disciples picked up twelve baskets of leftovers. About 5,000 men were fed that day, in addition to all the women and children!
Immediately after this, Jesus insisted that his disciples get back into the boat and cross to the other side of the lake, while he sent the people home. After sending them home, he went up into the hills by himself to pray.
Night fell while he was there alone.
Meanwhile, the disciples were in trouble far away from land, for a strong wind had risen, and they were fighting heavy waves. About three o’clock in the morning Jesus came toward them, walking on the water. When the disciples saw him walking on the water, they were terrified.
In their fear, they cried out, “It’s a ghost!”
But Jesus spoke to them at once. “Don’t be afraid,” he said.
“Take courage. I am here!”
Then Peter called to him, “Lord, if it’s really you,
tell me to come to you, walking on the water.”
“Yes, come,” Jesus said.
So Peter went over the side of the boat and walked on the water toward Jesus. But when he saw the strong wind and the waves, he was terrified and began to sink.
“Save me, Lord!” he shouted.
Jesus immediately reached out and grabbed him. “You have so little faith,” Jesus said.
“Why did you doubt me?”
When they climbed back into the boat, the wind stopped. Then the disciples worshiped him.
“You really are the Son of God!” they exclaimed.
Matthew 14: 13-33  (NLT) 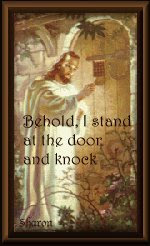 ﻿These verses give account of the time immediately after Jesus has heard the news of his cousin John's beheading by Herod.  Jesus is understandably grieved and needs time alone to pray.  However, the people would not allow that time.  Even in his own grief, Jesus had compassion on the people and took time to attend to their needs.
The disciples become concerned when the evening draws near.  They want Jesus to dismiss the crowd so that they may go into the surrounding towns and villages and buy food for their evening meal.  When Jesus directs the disciples to feed the crowd, they state the obvious in that they don't have enough food to do so.
Jesus calls for the food to be brought to him, blesses it and passes it to the disciples to give to the crowd.  The five loaves of bread and two fishes continue to replenish themselves until all are fed to their fill, leaving 12 baskets of left overs.
I wonder how many times in my life I've confronted Jesus with my 'not enoughs'?  Not enough money, not enough compassion, not enough time, not enough energy, not enough motivation, not enough........NOT ENOUGH.  How often have I used my own pain or burden to excuse myself from service for Him?  How often have I worn my pain like a halo, thinking "Well, if they only KNEW what I was going through"?
What an incredibly selfish woman I am!  Just as with the crowds gathered here, Jesus has always extended my 'not enough' into more than enough if I but surrender what I have to Him.  Just how often does that need to happen before I understand that my little becomes His abundant supply when surrendered to Him?
The disciples stood and witnessed the supply of the Lord meeting the needs of the crowd in more ways than one.  They saw the sick healed, the hungry fed, the dead raised, the sinful forgiven.  Have I not witnessed just that supply from the Lord in my own life, as well as in the lives of others around me?
You would think by now I would know that all Jesus asks of me is to give Him what I have.  However small and insignificant that may be, He can expand it into His abundant supply.  There will not only be enough, but more than enough.  The abundant supply of the Creator God, the God of MORE, is always more than enough.
From the mountaintop experience of the feeding of the crowd of 5000+, Jesus sends the disciples out in a boat on the lake.  He prays and then descends to the lake.  It is the middle of the night and a storm has risen on the water.  The disciples are now in the middle of the lake, far from the shore, and afraid.
As Jesus approaches on the water, their fear kicks into high gear.  They think it is an apparition, a ghost, and say so.  Jesus announces himself and calms them.  Peter, being the outspoken one he is, immediately speaks up and asks that Jesus call him to the water.  Jesus does so and Peter steps out of the boat.
The waves are dashing, the roar of the waters reverberate in Peter's ears.  He feels himself begin to sink into the watery depths.  He cries out "Lord, save me"!  Jesus reaches out to him and lifts him up.  Immediately, Jesus reaches out to him!  What a picture of what Jesus did for me when I called out to Him for salvation and at every call I've cried out to Him since!
There have been so many times throughout my life when accepting that I belong to the King of Kings has been difficult for me.  I felt as if there must be MORE I have to do.  It is then the sweet Holy Spirit reaches into the depths of my heart and reminds me of that moment in time when I cried out to Jesus and He reached down to me!  He lifted me above the depths of sin in my soul and washed me from the stink it had left on my heart.
When I allow myself to wander off into some sin or the other, I have but to cry out again and again Jesus reaches out and lifts me up.  Again, He washes the stink of my poor choices and my sin from my heart and renews my soul.  It is then I can cry out with renewed strength and understanding "You really are the Son of God"!!!
What is it the Lord asks of me?  Just what I have, that's all; nothing less and nothing more.  He wants my fear, my pain, my unforgiving heart, my doubt, my haste, my lack of ability, my abundance of excuses...my ALL.
Afterall...........He gave His ALL for me.
Posted by Diane at 4:35 AM

I discovered your blog through your comment on my friend Cindy's blog. I liked what you had to say and just wanted to stop by to say hello.

I am very moved to hear your story and how you have taken shelter under His mighty wings through your many sufferings and losses. This is an encouragement to me.

I like your blog and pray He will bless you with an extra big portion of His grace.

With love from another Diane

A beautiful and inspiring post.You have so encouraged me today.
It is in those dark and painful places that we lean on Him even more. Oh so many times I have had nowhere else to go but to Him. He is ever faithful and never lets me down! I am so blessed.
Enjoy your day.
Blessings and hugs...

Give me what you have. Those 4 words say everything to me. We are all born with God given gifts!
If, we only realized the capacity of love and kindness we could pour onto others...this world would be a much better place.
Love you Diane...lovely post.

Thank you for this encouragement thru word and music

Oh yes, He is not the god of not enough, He is the GOD of ALL in ALL!

This is one of the best parts in the whole Bible. I just love hearing them over and over again.
I so often identify with Peter. He had witnessed Jesus preaching and feeding the 5000, and when he saw Jesus walking on the water he had the guts to ask if he might come out to him; and then he forgot looking at Jesus and began sinking.
I've been there, done that. The wonder is, Jesus didn't turn away from the eager, but weak disciple, he saved him once more.
I praise the Lord that I may come back with my defeats and regrets, and He'll save me over and over again.
That's the kind of Savior I need now and will continue to need all of my life.
From felisol