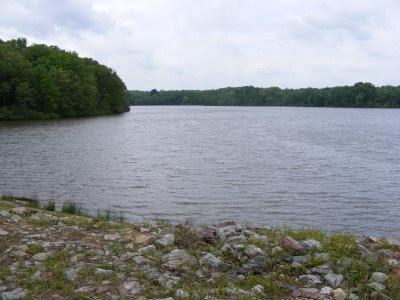 As I sit here this morning, my heart aches as much, if not more, than it did on that early Monday morning in January when I had just watched my precious Terry step into eternity. I face each minute as though I'm looking across whispering waters, knowing my heart longs to be on the other shore. I can't quite see that shore clearly, but I know what my heart yearns for is there.
I had been doing so well over the past several days. I smiled, laughed, felt contentment and joy in my heart again. Then, without warning, the grief knocked me down with so much force I felt as though everything good was gone forever. I wasn't prepared. I was warned. Warned by every book I've read, every grief support group I've joined, by so many others who have walked this road before me. But, I wasn't prepared.

How did I let this happen? Could I have done something different? Have I completely failed myself by ignoring the warnings others tried to give? Did I really think it could be that easy to let go of a lifetime of loving and living and making memories? I don't know. I'm back to square one; I don't know.

The older I get, the more I realize I don't know. Did I stop learning somewhere along the way? Did I stop paying attention? Was anything in my life prior to this preparing me for this and I just didn't notice? I'm so full of questions and have NO answers. I've prayed, but it feels like my prayers aren't reaching the ceiling, much less the heavens above.

Oh my Lord in heaven, will this happen again? Will I feel as though I'm making gains and actually beginning to feel again just to have my feet knocked from beneath me again? How does one survive repeated attacks like this? Again, all questions with NO answers!

Nine years ago at this time, Terry and I were settled into a skilled nursing room at the Baptist Hospital in Memphis. He was so broken and bed-ridden, but he was healing and he was alive. That's all that mattered to me....he was alive. Everything was going to be just fine, he was alive. I remember so well making that statement to so many people who called to inquire about how we were doing.

Now I realize that his dying started nine years ago. He was never the same again after the accident. As I look back over the years, I see the consistent progression of poor health that overtook him following the accident. I couldn't see it as we were going along. Or, perhaps I didn't WANT to see it. Whatever the case may be, I missed it somewhere along the line.

At his home going celebration, a friend he had worked with made the most precious speech. He told me of how Terry always had me at the forefront of everything he did. They worked a dangerous job. They worked in research and development for a pyrotechnics developer and manufacturer for the American military, as well as multi-national military units around the world.

If they were going to be doing something particularly dangerous, this man said Terry would always take the time to call me first. He would tell him "I have to call Di, just in case". I knew he called often from work, but he never told me why. He always said "I just called to tell you I miss you and I love. See you this afternoon!" He couldn't and wouldn't tell me about his job. He never wanted me to worry about him.

Every afternoon while driving home from work, he would call me on his cell phone and talk to me till he pulled into our driveway. On the particular Thursday afternoon of his accident, he was so tired he just wanted to hurry home. So, instead of calling, he just concentrated on driving. I will always wonder if things would have been different had he called. I'll never know.

All I know is now I'm left alone. So alone, I feel disconnected from everything and everyone around me. I feel like I'm back to just going through the motions again. I have cried until I think I couldn't possibly have tears left, yet they still fall. The anguish spills over in groans that I can't understand. Yet, I know the Lord does.

Therein lies my only hope. The Lord knows my pain. He understands my broken heart. I reach out to Him and He is always there. I call out to Him and He never turns me away. Oh, I deserve to be turned away! But, He never does. That's just one of the things I find so absolutely amazing about God. "A father to the fatherless and a defender of the widows" says Psalms 68:5.

oh diane...i have no words except i am thinking about you and praying for you

Diane, how I wish I had a balm to help you heal and words to ease your pain. I don't. But we both know WHO does. The Lord will be your refuge and a very present help in trouble. There is no other. You're being prayed for today by many, I'm sure.
God bless you

When you love someone so deeply, I imagine it take a VERY long time, not to get over them because I don't think you ever do. It takes a VERY long time to start moving forward once again. Finding new purpose and redefining your life. All that you are is wrapped up in another life and now you have to learn to live the life you have been given. Girl, I don't know how you do it to be honest! I know God provides for our every need but what about those things we WANT? How you WANT to see him again, hold him again, talk to him again and so on... Help us Heavenly Father in our weak flesh, to see the things we can't see with our earthly eyes and limited understanding!
Hugs,
Connie

PS
the word verification is
"ABLED"
I think that's God's way of using the internet to let you know He is indeed ABLE!

Dear Diane...after reading your last 2 posts. I can understand why you are feeling so broken. First, whatever has happened to have caused you such heartache, that you are thankful that your precious Terry is already with the Lord. So that he doesn't have to witness it...has to be bad. You, now have more to deal with....alone.
God, be with my precious sister Diane. Wrap your arms around her, hold her close. Be her husband...the lover of her soul.
Give her peace and may she feel your presence...always.
In Jesus Name,
Amen

You know this won't be a straight up climb but rather you will move up the mountain and then down in the next valley but beyond that the road will start back up and each day will take you higher than you were at the beginning. It is a difficult climb and some choose never to even start it but I know you and you will keep climbing. Take a break from it all and then get back on your journey.

I am thinking of you and praying for you always!

...listening to Kathy Mattea with tears in my eyes as she sings "Where've You Been?" Somewhere I have that CD - haven't played it in years. I don't know how you managed to choose all these songs that play...you must cry through every one.

Oh Diane, bless your heart.I do so wish I could say something to help you through this terrible time. I am praying for you.

Dearest Diane, I can't imagine what you are going through but I do know that the Lord Jesus will bring you through this tragic time you are facing.

My prayers are with you!

Diane, I have been given your blog from another friend on blogging.
I too lost my dear husband of 47 1/2 years in July 2007. Yes tears are there when you least expect them and it seems you will work your way through grief one step at a time.Sometimes it seems you are drowning in your own tears.
yet Isaiah 53:4 says. Surely he hath borne our griefs ,and carried our sorrows; so know he has already carried the exact thing you are and he fully understands how you feel.
I feel Gods presence with me , no words to explain it , just I know its him. I did get to prepare for his home going yet it still came too soon. He had been sick but able to go for a # of years.We planned to go in the rapture together ... ha... Gods plan was better for him and I am learning to accept Gods will and trust him more each day.
I have 4 children who were and still are a lot of support .They remind me that now i am only married to the lord so I don't have to please anyone on this earth. But that takes some getting use to and it seems I have balked a lot ,just because I really was not used to walking this way...
It is a strange road we are walking and i didn't know who I was anymore. I had Bills wife for so many years & I didn't want to not be.
See how I balked. But its OK that is natural . what ever this new crisis is i have said a prayer for you to know how to handle it and to rise above its trouble ,tormenting thought..
God is able.
I pray for peace no matter what is going on and peace in your times of loneness.
Elsie <><

You have a full plate...you have been on my mind so much today and I have talked to God throughout the day on your behalf.....

I posted a song for you on my blog...

Bless your heart, Di.
I am praying for you and hope you will find something to do outside your home...maybe something to help fill your days AND your mind. Meals on Wheels, local hospital, anything to help occupy your time.
Prayers for you....

Lord, how I would love to wrap my arms around you, Diane. I'm so glad you poured your heart out to us. Many thoughts and prayers for you , my dear.

Diane,
You have been on my mind today and I said a special prayer for you.
I pray God will give you peace
and strength with each day. Your songs are so touching, thanks for sharing them and your thoughts with us.
Email me the picture you found of us,I would love to see it.
LOVE you so much !!

I imagine grieving is a little like eating an orange.

You can't swallow the whole thing all at once. First you have to peel it piece by piece. Then, you break off one small section at a time to eat it.

Just a little at a time. Small bites. Baby steps.

You will get there Diane. Hang in there!