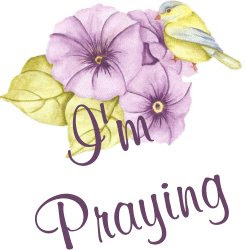 So many of you have been so wonderful and have blessed me so very much by praying for me and for my family. I just wanted to post an update so you all would know how faithful the Lord is!

I had posted about an issue in my life that had caused me so much pain and so much heartache that I was just thankful that Terry wasn't here to know about it. That issue has been totally resolved and can NEVER be a problem to me again. It worked out in a manner I could not have dreamed was possible, but the Lord knew all the time! Thank you so much for your prayers. God, as always, is faithful to those who love Him and who seek to do His will!

Daddy is back with my sister and her family. He is doing better, but still is having some problems. We know this is how it will be for him. Daddy has C.O.P.D. with chronic asthma, emphysema, bronchitic and pneumonia. His CT scan during this hospitalization showed that the emphysema has worsened considerably. What we initially thought to be a case of pneumonia was actually permanent scarring in his lungs from the emphysema.

The doctors have told us that he now has a certain type of bacterial infection in his lungs that is not curable, but will wax and wane with his condition. Three different antibiotics were required this time in order to get it under control. He remains on Levaquin for another 3 days at home. This is the natural progression of his disease. He developed thrush in his mouth due to all the antibiotics and had to be treated for that as well.

He is, at present, as well as we can expect him to be until the Lord performs the ultimate healing for him and takes him to his heavenly home. Daddy is tired and still very lonely. I understand that loneliness now. Were I Daddy's age, with his illness and having to deal with this loneliness, I would be so ready for the Lord to call me home. Daddy is. So, we will love him and take care of him and miss him when the Lord calls him, but we will know it was what Daddy had longed for.

As some of you know, I have been awaiting approval from Medicare since early February to have surgery. I finally got the approval last week! Praise the Lord! I am scheduled for surgery on July 10 at Vanderbilt Medical Center in Nashville. I will have a gastric stimulator replaced.

I have a condition known as gastroparesis and chronic intestinal pseudo-obstruction. This simply means that my stomach and bowel do not empty as they should. This is caused by a lack of neuro-stimulation in the vagus nerve. The gastric stimulator is something of a pacemaker in that it provides electrical stimulation to the vagus nerve, causing the stomach to empty it's contents and encouraging the bowel to move the contents through until they exit my body.

This will be my third stimulator implantation surgery. The first was in October, 2004, at which point I had the very first implant. The battery in that one lasted about 20-22 months. It died and was replaced in December, 2006. That battery died sometime last fall. However, due to Terry's condition and subsequent death, I had been unable to go back to my doctor until early February of this year.

At that time, my doctor found that the battery was dead, which I had already known due to worsening of my symptoms. He immediately set forth the process of getting Medicare approval for the replacement. So, I will visit my doctor on June 25 for the pre-op testing and will return on July 10 for the surgery. I am so very thankful to finally have a surgery date scheduled!

Due to having been without the stimulation for about 7 months now, I am experiencing symptoms almost as bad as before I got my first stimulator implantation. I am nauseated 24/7 and get extreme bloating in my abdominal area. I throw up 20-30 times daily and have lost nearly 30 pounds. I don't mind losing the weight, just not in this manner!!! I can only eat about 2-3 bites of food at a time without getting sick later and throwing everything back up.

So, it is all now just a matter of time before I can begin to improve. It will be such a huge blessing to once again be able to go through a day without nausea and vomiting. I thank all of you for your prayers and support. You are all such a blessing in my life. Blogging has opened up a whole new world of wonderful, Christian sisters to me. What a blessing you are!!!
Posted by Diane at 2:09 AM

Dear one, so glad you are doing better...in all ways.
Take good care..

My goodness.....you have so much on your plate..when another person shares their struggles it sure puts life into a good window frame and that directs ones thoughts and prayers for the day........so, even though we have never met...my prayers are for you today, that regardless, you will be overcome with joy....

Diane, bless your heart...all that you're going through. I am glad your dad is doing some better...it sounds like one of those things you just "learn to live with". Poor thing. I'm sorry to hear you'll be having surgery...but it sure sounds like you'll need it. I'm sorry to hear you're having those problems especially while trying to care for your dad.
By the way, thank you for praying for my dad and his kidney stones...he is MUCH better today, praise the Lord!
Praying!!!!

I'm glad to hear that your dad is out of the hosptial! Did they give him Nystatin for the thrush? That is what they gave my daughter when she was a baby. I also wanted to tell you about a few vitamins. I have read that Garlic is a natural antibiotic in many health books. You might want to google it. I take it everyday. The health books also recommend taking acidolpholis (good bacteria) after you take an antibiotic. I always do that also. I always try to treat my health issues with vitamins and minerals. I'm not completely healthy though but I really know that I feel just awful when I don't take my vitamins.

I'm so sorry to hear about your condition. I have never heard of that before. I'm glad to hear that they have scheduled your surgery. I wish it was sooner for you. Is that the only place that can do it and is that the soonest they can do it?

Diane, I'm praying for Daddy as well as praising God for His answer to prayer regarding your surgery. God is good, all the time!

Diane,
I am so glad you have your surgery scheduled, I know you will feel so much better.
So glad Van is home. We will keep you both in our prayers.
Love you !

Oh, Diane...I am sorry to hear that you are not well. But I know that the Lord guides you and He is your strength.
Glad to hear that your Daddy is home and doing better. Now, you get some rest...I am praying.
Love you,
trish

Just popping in to each of the blogs on my list. You know you are in my prayers and my praises.

from The Raggedy Girl

Thank you Diane for sharing many things I knew nothing about, being a new blog friend of yours and have just recently entered your blog life.

I will surely lift you up before God's throne.

Thank you to all of you! Blogging has opened my life in so many directions, the best of which is all the wonderful, praying Christian women I have met. I am so very thankful for each of you! May the Lord bless each of you.

Di, my prayers are with you in this surgery, and with your Dad. I know how much you will miss him when he is gone, but just know he will be where he wants to be. I know I missed my Mom and still do, but I also knew with her type of Cancer in 1970 there was no hope, just pain ahead. When she died in her sleep I thanked God for his mercuy and also cried for my loss. I will continue to pray for you.

Thank you Molly. Yes, it is never easy and we are never ready to let our loved ones go. However, we do realize that we must relinquish our desires to the Lord and accept His will for their lives. Thank you again for your prayers.

wow, Diane, you have been through a lot with your digestion system. I will pray right now for you to have a safe and successful surgery.

Dear Lord, I come before you on Diane's behalf asking that you pave the way for her upcoming surgery to have a successful and longer term outcome. May she have your peace throughout the procedure before, during, and after. Please comfort her and help her with her grief, caring for her sick father, and all that she has on her plate of life. In Jesus name,

Wow Diane... what a trying year this has been for you.

Keep hanging on... Love you!

Oh my, I had no idea you were dealing with such an ailment on top of everything else you are going through. I am so sorry. I will pray for you.

thanks for the up lifting posts... great faith you have!

Oh--I've never heard of that condition--it must be awful, and I'm glad you've been cleared to get a third one done. You must be suffering terribly. I'd love to lose the 30 pounds--but not THAT way!