Well, I'm running late today! I almost forgot it was Favorite Family Foto Friday! I have had a busy week and was exhausted last evening. I went to bed without giving a second thought to putting up a post for today! Then, I got up this morning and just purely did not remember it was Friday. So, I'm late, but I hope you'll enjoy my post anyway!

Be sure to drop in on Deborah at Pictures, Pots, Pens and see others who are participating in Favorite Family Foto Friday.

Susie Atkinson
ca. 1900
This week I want to introduce you to my great, grand aunt, Susan Evaline Atkinson or simply Aunt Susie, as I have always know her.
Aunt Susie was born on August 21, 1886 in McNairy Co., TN, the seventh child of James David and Elizabeth Rachel 'Jane' Smith-Atkinson. The above foto was taken about 1900, making her 13-14 years of age at that time. By this time, her family had moved into Hardeman County, TN, where Aunt Susie spent the remainder of her life.

Aunt Susie
ca. 1905
By this time, Aunt Susie was about 18-19 years old and was within months of getting married. This is a crop from a family gathering foto make shortly after the marriage of Aunt Susie's sister, Nellie, to Earnest Newland, who are my great-grandparents.

Aunt Susie and Uncle Joe
ca. 1915
Susan Evaline Atkinson married Joseph Evard Morphis on February 4, 1906 in Hardeman County, TN. Aunt Susie and Uncle Joe had one of those marriages we all dream about. They were totally devoted to each other. Although Aunt Susie was barren, both loved children and were wonderful surrogate parents for Nellie's children after Nellie's death in 1918.
Maw McDonald told so many stories of the wonderful times spent with Aunt Susie and Uncle Joe. Both were devout Christians and helped to make sure Nellie's children were introduced to the Gospel at early ages. My own Daddy remembers Aunt Susie well and speaks so fondly of memories of her. He told me about how she was the first person to ever read the Bible with him or pray with him. Because of Aunt Susie's influence on his life, he now is a wonderful Christian man who has raised a family of children who love the Lord and seek to serve Him.
Uncle Joe died much too soon on September 27, 1932 at their home near Pocahontas in Hardeman County, TN. He suffered much and would not give up to dying until Maw McDonald's brother, Melvin, had promised him he would make sure Aunt Susie was cared for until the Lord called her home. 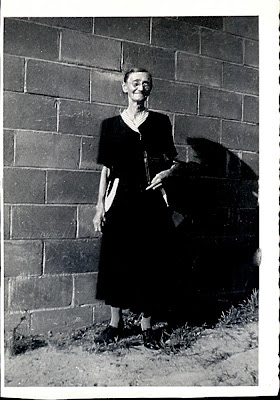 Melvin kept his promise and lived with Aunt Susie and took care of her until she went to meet her Lord on March 22, 1952. After Aunt Susie went home, Melvin moved to a neighboring county for work, where he met and married for the first time at age 45.

Aunt Susie looked like a pistol. Especially that photo with her hand on her hip.

The Eric Clapton song is one of my favorite songs. I enjoyed listening to it.

I really enjoy learning about your family history. I love knowing about my families stories. I also like Eric's music...

Enjoyed reading about your aunt Susie.

I just got back from my vacation to Canaan Valley, West Virginia so that is why I'm late at looking and I didn't post for this Friday's Favorite Foto.

I just love the stories that you have about your family. Life was so much different back then. It seems to me like families took care of one another better than they do today.

Great pictures. I'm sure that you Treasure them!

Have a Great Week!
Hugs,
Angela

what special pictures and a special lady- thanks for sharing her story. I have been missing- just having one of those quiet weeks. I will be back soon- hugs from Meme

Diane,
Hope you are doing well today.
I still am not up to blogging much so just moving some of my old Yahoo blog post .Now I am off to sister in laws to pick early apples to make freezer applesauce this afternoon.
have blessed day.

Great family history! I am finally feeling well enough to get on the blog and make some rounds! It's been a while since I posted something on my genealogy blog which I need to get cracking on!

We're heading back to St Charles this Friday for our annual family reunion which we plan and execute with Dave's youngest brother and his wife.

Saying a prayer for your upcoming surgery!
Hugs,
Connie