Thank you for joining me once again for Favorite Family Foto Friday. This weekly meme is hosted by Deborah over at Pictures, Pots, Pens. Be sure to drop in on Deborah and check out her submission, as well as check out others who are posting in today's meme. 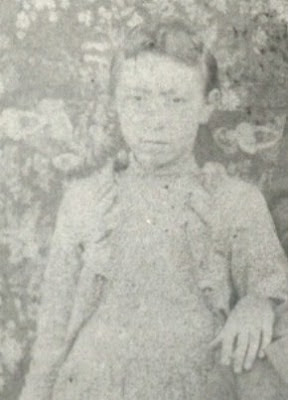 The picture above is of my Great Grand Aunt Ollie Atkinson. Ollie was the youngest child of David James and Elizabeth Rachel "Jane" Smith-Atkinson. She was born on April 1, 1889 in Tippah County, MS. That would make her about 11 or 12 when the picture was taken.

On November 8, 1911, Ollie married John Thomas Garrett in Tippah Co., MS. Mr. Garrett was born on May 5, 1873 in Mississippi. John and Ollie had one daughter, Orilla, who was born in late 1912 in Tippah County, MS. John had been married prior to Ollie and had two sons from the previous marriage, Charley born about 1902, and Hubert born about 1907. I do not know what caused the death of John's first wife. I do remember hearing that Ollie loved the boys as her own and made no difference between the boys and her own daughter.

I know very little about Ollie other than mere numerical facts. I can vaguely remember Maw McDonald speaking of "Aunt Ollie", but have no specific memories of things she said.

Ollie died at the young age of 32 on November 11, 1921 in Mississippi. I have had little success in tracing her daughter or stepsons, or of finding death information on John Garrett. I am suspicious that they may have traveled west with other family members after Ollie's death. Time will tell!

Thanks again for stopping by. Be sure to stop by and check out other Favorite Family Foto Friday submissions at Pictures, Pots, Pens. Have a wonderful weekend!
Posted by Diane at 2:13 AM

Oh Wow Diane! Such a great old picture!!! Have you tried to see if they have the census records online for that state? I have been lucky to find a few places on the web that have West Virginia's census records online. At WV Cultural Center's web page they actually have a lot of the death certificate, marriage records and birth records for different years online now. That has been such a blessing to me that they have that information on their web pages as I just can't go there to do my research because I just can't take the kids there! lol

Hope you find some more information about her!

32 is way too young to leave this world. Things were so different back then.
I hope you find more info on this family.
Happy FF
Love Claudie
xoxo

Very interesting. People died so young, what a shame.

You are the best at having really old photos that have a story and history behind them. Thanks for sharing, Sue

What a great old photo and story, hope you find out more about her.
Love you bunches !

you have some serious pictures there... very very very cool! lvoe history!