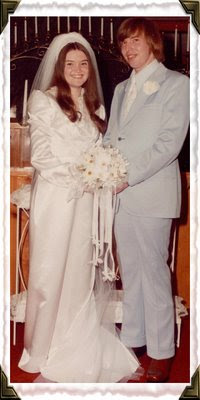 Mr. & Mrs. Terry E. Chandler
June 14, 1975
On this date in 1975 Terry and I were married. We had been engaged for just over 13 months, and had been dating for over 2 years. The past 34 years have been full of every emotion you could imagine, but the most prevalent and prominent has been love, pure and abiding love.
Terry & Di
August 4, 1974
I loved him then, but had no idea how much more I would come to love him as the years passed.

The Newlyweds!
Christmas, 1975
At my parent's house.

Christmas Eve, 1976
Over a year together and we're happier than ever!
This is at Daddy and Momma's house. 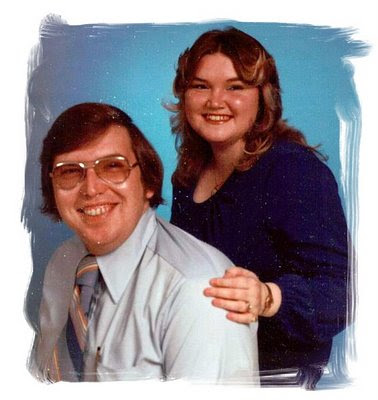 November, 1978
Professional portraits we had made for our family for Christmas
Me and my 'Farrah' hair!
We're heavier now, but still absolutely and totally in love with each other! 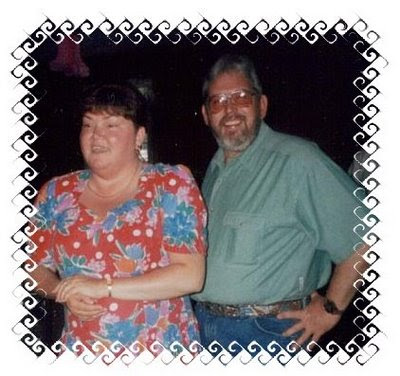 Summer, 1996
Family Vacation in Alabama
My entire family took a family vacation to northern Alabama. It was a short trip, only 3 days, but we had a total blast! This picture was taken on a lake shore where we stopped to picnic for lunch on the way home.

March 23, 1997
On the occasion of my parent's 4oth Anniversary.
My parents renewed their vows on their 40th anniversary. My sisters and I and our hubbies were the 'wedding party', my niece was a Jr. Bridesmaid and my oldest nephew was a Jr. Groomsman. The two middle nephews were ushers and my youngest nephew was the Ring Bearer. Oh, and Katie sang a solo, Steven Curtis Chapman's "I Will Be Here"! 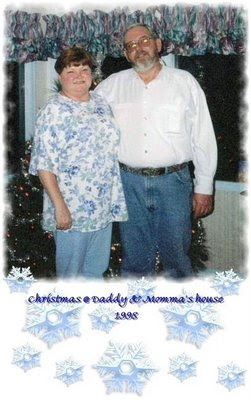 Christmas Day, 1998
At Daddy and Momma's house.
Christmas Eve, 2000
At the home of Terry's Mom and Step Dad.
This was our first Christmas after Terry's accident. It was such a joyful Christmas because he had come so very close to dying that year!
We're old and fat now, but still so totally and completely in love!

Thanksgiving, 2006
At Daddy's house.
This was the first Thanksgiving after Momma went home. Also in this shot are my nephew-in-love, Brian, and my nephew, Jake. 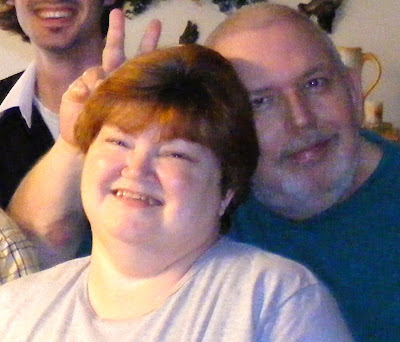 Mother's Day, 2008
This is one of the last pictures I have of the two of us together.
My family had gathered at our house for Mother's Day. Terry wasn't feeling well and was beginning to be very sick, but still had his sense of humor and that glint of 'devilment' in his eyes! Oh, how I miss that! We were in love until his last breath and now that love lives in eternity. How truly blessed I am to have been loved by this precious man!

You will note that there was a large gap in the photo dates. I have pictures from those years, but haven't gotten them scanned into my computer yet. Also, the pictures from years are sometimes very sad. It was our 'baby years', the years of trying to have children and of losing three babies in miscarriage. They were, without a doubt, the most difficult years of our marriage. However, we worked through all of the pain and clung to each other even more tightly.
Although I am extremely sad and lonely today, I am also so incredibly blessed and joyful to have loved and been loved so completely. It was and is the love of a lifetime.
Posted by Diane at 1:00 PM

What a great pictorial record of your life together.

Happy Anniversary. I am so sorry for your loss. We think that our lives will never change and then they do. (I see the devil in those eyes of his) We got married on June 24, 1972 and our pictures certainly look similar in style.
You sound like a strong woman and I pray that you continue to move forward. I am sure that having this blog helps you in many ways.

Dear friend...my thoughts and prayers are with you today. A day, filled with beautiful memories of the man, God made just for you!!!
I love you sweet Sister...God is faithful.
Trish

Happy Anniversary Diane!!! Your picture tribute to your marriage is beautiful! I can tell from the pictures that you two were soul mates!!! You are blessed to have such sweet memories of your life together!

I can only imagine how hard today has been for you. I hope the happy memories of Terry bring you some comfort...

Such a sweet tribute!

Thank you for sharing the pictures.
I enjoyed reading your story.
I feel like I know you and would really enjoy having a nice chat with you and meeting your family.

I have actually found some time this morning and thought I would visit a few of my favorite blogs.

I have been so busy but I really miss keeping up with everyone's posts.

I think of it as having a neighborhood of good friends.

What lovely photos showing a whole lifetime of love.

Have a Wonderful Week!
The Raggedy Girl

The gift of true love...how blessed both of you were. Many search and hope for this gift their entire lives and never find it. God must love you both lots.
I hope there was some smiles though the tears...I'm sure it was a difficult day.
blessings!
Pat

Diane, you and Terry were truly soulmates brought together by our loving God. I know it was a difficult day, I pray that you are doing well.
Hugs and blessings, love you !!!

What wonderful memories you have.
Some day i may post more , but right now I still can't post about "us" on my blog. i am so glad you could do this and share with us .I hope it helped in some small way to bear the emptiness I know you are feeling.
Tuesday my oldest daughter will be gone 41 years & I cried through choir and at lunch Sunday and it seems I could not stop it.
God Bless you with his presences and may you feel him & know that he is walking beside you today.
Elsie <><

Y'all made a beautiful couple. I know you miss him so, but you will see him again one day and he will be whole. I have a baby boy in heaven and look forward to when I can see him. God Bless you Diane.

Diane, this is the most precious post I've read in a while! You and your husband looked so happy in each picture. :) Y'all were/are definitely blessed with a wonderful marriage!
God bless you.

Please forgive me for not commenting on Sunday. I did say a prayer for you and hoped your were holding up. My favorite line is your last, "incredibly blessed and joyful to have loved and been loved so completely. It was and is the love of a lifetime." You have a way with words and such a great outlook on life. You are a role model for us all.

What a wonderful tribute and what a beautiful love story. Thank you for sharing that with us.

I can't say much myself, as you know my husband and I were married 30 years and I also celebrated our 31st year of marriage last March 18 without him. Yes our husbands are in heaven now...

And I agree with you when you say that though there is sadness in your heart at Terry's homegoing, you are blessed and joyful to have have loved and been loved completely.

I feel that in my heart too.