Are You A Person of Good Influence? 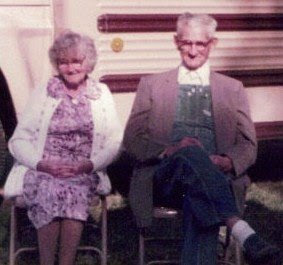 Ilene 'Maw' McDonald & Mr. Carl Stewart
(This picture was taken about 1985 on the grounds of our church.)

My 'Maw' would be red with embarrassment if she knew I was posting this picture! She never had a place in her heart for any other man than my 'Paw'. Although he passed away in 1966, she never remarried or even considered it. She was totally devoted to Paw, her family and her Lord. There was need or time for anything else.

She was such a sweet little lady. When Paw died, she was very young....only 55 years old. I know now just how young that was because I am only 51. I had expected to be able to spend many, many more years taking care of my Terry. Maw expected to spend her life taking care of her Herbert. When he died suddenly of heart disease, she was devestated. I understand that now. Many, many times she told my sisters and I that we were all that held her together at that time. We spent every weekend with her and later she became our sitter when Momma was working the night shift.

She spent the week with us for the first few weeks. Then, she said it was time to go home and she did. Since we were in school, we couldn't spend the weeknights, but we spent every weekend! I don't know who had more fun, Maw or us! She'd pop huge dish pans full of popcorn and we would lie in the floor watching T.V., eating popcorn and knowing we were living the life of Riley, whoever that is! Life couldn't have been any better.

On those nights, when there was nothing on T.V., or after the stations signed off, we would sit and sing hymns from her old copy of her Grandfather Atkinson's old hymnal or read the Bible out loud together. I still have that hymnal now and treasure it more than if it were the finest gold. Those early years of singing hymns with Maw, reading the Bible with her and just spending time with her was one of my earliest influences for the importance of being a Christian.

Maw went to church with us on Sundays. She always said she didn't have anything to give the church, but that it sure gave her something. She was so wrong about that! She was so loved by all the kids and so respected and loved by the adults. When she went home, it was a sad day indeed for the people of our church, but what a celebration was held in heaven!

Mr. Stewart is the grandfather of one of my brothers-in-law. He was a very tall, large framed man with a deep and resounding base voice. I used to love nothing more than to sit and listen to him sing in that resonant voice, lifting praises to his Heavenly Father. He was an elder and deacon in our church. He was a great Bible teacher and leader. He was never afraid to stand up for what he believed and would do so with deep respect for those who disagreed with him.

I remember one of his favorite songs being "The Fountain Free". He would stand straight and tall and sing with all the love for Jesus within him and smile while tears rolled down those wrinkled cheeks...."will you come to the fountain free,will you come tis for you and me; thirsty sould hear the welcome call, tis the fountain open for all". Oh what joy that memory holds for me!

Even after having to go to a nursing facility to live, his family would bring him to church for visits and he would rise and stand as tall as his frail body would allow and sing in that still deep and sweet voice. To me, that is the voice of heaven!

These precious people were two of the first influences in my life for Jesus Christ. Because of their love of Jesus and their living example of what He wanted us to be, I know the love of Jesus and His grace and mercy in salvation today. When it comes my time to walk the golden streets of heaven, I look forward to seeing them again and telling just how much their lives influenced my own.

I love this post, Diane... you have a way of touching my heart. I know the Good Lord puts people like this in our life to help shape us into who He needs us to be.

What a beautiful tribute.

What lovely memories, Diane, and wonderful testimony to God's goodness through those He places in our lives. Thank you for posting this.

My paternal Grandmother (the one I shared about the Mr Mouse story and my son) and her mother, my great grandmother were my influences as a child. They are my example of what a Grandmother is and what an important roles they have in their grandchildren's lives. Knowing the relationships I had with them makes me want that with my own grandchildren!
Connie

I didn't realize I was posting under my son's name, the previous comment was from me!

What wonderful memories! I believe the world would be a much better place if everyone had people in their lives like Maw McDonald and Mr. Stewart.

Childhood activities and family gatherings make the best memories of all. I love your posts.

Memories, how sweet. This was a lovely, heart touching post, I enjoy so much reading your blog !

You all are so kind and lift me up when I'm having a bad day! I had not gotten around to my blogs until now and what a blessing to come here and find all your precious, encouraging words! I love you all and am so thannkful the Lord has allowed us to be friends (and some of us are family too!). Love and many, many hugs.........

Such Precious memories Diane! Thanks for sharing them!

What a sweet post. I love to read your "remembrances" I didn't visit yesterday so now I have two posts on each of my buddies blogs...yikes!